Lately, I got obsessed with a 3×3 small plastic cube popularly known as the Rubik’s cube. Though I used to play around with a cube at my friends place, the real addiction caught me after I learnt to solve one. 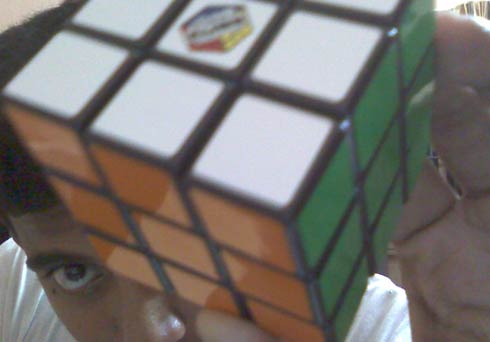 Solving a cube is easy, the guru’s have brought down all the steps into some easy algorithms. Follow these two awesome videos.

Buy a good quality cube. The one you get for Rs. 50 is useless. Buy the Rubiks.com’s real Original Rubik’s cube for a start. In India, its marketed by Funskool for Rs 249.

Watch these videos over and over. Soon the algorithms will be wired into your brain and even when you get confused (which you will be), you will be able to recall them from the videos.

Take it nice and slow. Don’t rush to solve it as fast as possible. While doing one step, plan the next step in advance. Over time, you will grow faster and faster.

My record time so far is 1 minute 31 seconds using the above said algorithms, some lubrication and short-cuts. More on speed cubing, later.

Have fun, twisting and turning 😉

Tagged with: How to , Photos , Rubiks Cube , Tutorial , Video