The title might give you a sense that I am writing this from Indonesia, but no, its been a while (actually a long while, getting back to life after the vacation took much more than I thought) since I came back home. Now that gives you the idea that I have been to Indonesia.

Why did you go? 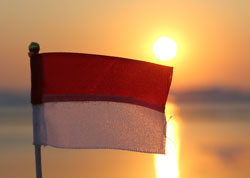 Well, in Airport Customs Terms, Purpose of visit was a social visit. Meeting Friends and leisure. It was on my new year resolution this year to Get my Passport and to use it. I had been trying to get a Passport since I was 18, but each time I would give up since I had some complication in my address. But this time I did it!

Why Indonesia?
I don’t know if its me or them, but the friends I have from Indonesia seem to stick. I have made friends from various parts of the world, but most of them never stayed. Visiting Indonesia was in my Bucket List and hence it was my first choice. (Nah, you know I am lying 😉

And how long did you stay?
12 days. Reached Jakarta on 11th August. Visited Jakarta, Bali and Bandung. Returned from Jakarta on 23rd August.

This was the first time I leave the country, and the second time getting on a plane, I was so excited right from the start. Here is the thing, I wanted to pay for the whole trip by myself, and that’s what happened. So the trip was a huge success even before it started.

As opposed to popular belief, being a CEO of a start-up is not high paying in financial terms. I had to make full use of my 24 hours aggressively going after freelance projects and other things I used to do when I was in college to meet the target. This was the first time I work for money. Oh, am not saying that I don’t otherwise work for money, I do! I love making money but this time I had a target in mind. And I well exceeded that!

So the day came, on 9th of August, I flew to Mumbai. There were two intentions visiting Mumbai. First, my flight to Jakarta was from Mumbai. I was flying on Air Asia, and yes, they have service from Cochin. But when you book if you are flying from Cochin, it takes you Kaula Lumpur first and you have to book the next flight as a separate booking. But if you are flying from Mumbai, you have option to book it as a through flight. Flying from Cochin was much cheaper, but I choose Mumbai to be on the safer side.

So I reached Mumbai, took a rickshaw to the nearest railway station. I was in Mumbai last December for the Tata Jagriti Yatra, so I was quite familiar with their Metro Rail system (but I ended up travelling in the First Class of the metro on the cheaper ticket and didn’t realize that until later, luckily there was no checking that day 😛 ). I had to get the metro to Virar, thats where my friend Sumit lives. I would be spending my time in Mumbai with him. His parents are very guest-friendly and treated me so well. I really hope I get a chance to give them back someday. 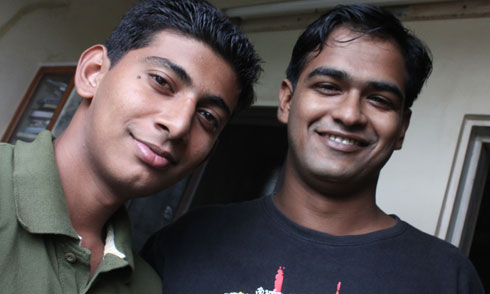 Here is the second reason to visit Mumbai. Sumit had started a shop that sells Idli’s and I wanted to see it. They have about 12 different varieties of idli’s and I got to try one. I said, the girl who marries Sumit is so lucky, cuz he is such a good cook 😉

Virar is quite far from Mumbai but just like Mumbai, its a mess. I went out the second morning to take print outs of my Boarding pass and I should say, once or twice I got terrified. I even felt like there were people following me, maybe I was being paranoid because I had cash with me as dollars in my pocket which I couldn’t afford to loose. I survived.

When it was the time for me to go to the Airport, Sumit dropped me at the station, then took the metro again and a rickshaw to the Airport. On the way I brought a pink rose, I wanted to buy something for that someone from India. The rickshaw wala charged me around Rs 200 for what appeared like a Rs 50 trip. I was a tourist there, I had little choice but to pay.

Up Above The Sky So High..

The Air Asia flight to  Kaula Lumpur took off at about 11 that night, the 10th of August. The view of Mumbai is awesome at night, too bad I left my camera in my bag.

I was in my seat and then this thing happens.. a cute girl sits right next to me. I was like, okay, this is interesting, you know.. I should say hi. Now then she says, Hi and I was like. .dood, today is your lucky day.

Twist in the story, she asks me, are you travelling alone? I said yes. Then, Could you please exchange seat with my bf? *play the dumb background music now*.

I slept off in my new seat, sitting right next to an old guy. I reached KL by around 5 in the morning next day. I walked down the flight and touched an international soil for the first time. After the formalities, and making sure that my luggage would be transported to the next flight, I was waiting near the gates and then it happens. When the time comes, you have to leave behind your everything and attend the call.. The Nature Call..

I wanted to be ready for something when I reach Jakarta, so I had carried necessary stuffs in my back pack. I went to the rest room (they have it really clean) and answered the call, brush and got ready and it was time for the next flight.

Here she comes.. Milana Ryan. Among the reasons for choosing Indonesia, I missed one and that is Milana Ryan. If you do not have a smile on your face by now, then you do not know yet. Will make you smile later 😉

She was picking me up at the Airport. So here I was just outside at the arrival and here comes taxi drivers with their offers, its the same everyone. I told one guy that someone will come pick me up and then he offered me his phone, I knew that was a trap and said No. I was looking for a public phone and this guy wont leave me. He took me to a security guard and made the guard give me his phone. I took it and called Milana and she said she will be here in 30 mins. Now this guy wanted tip and I said I don’t have your money. He said dollars would do. I had no intention to pay him, so I said a NO right on his face and he was insulted. Tourists do have rights, you know?

Now I found a way to get rid of the Taxi wala’s. Stand still at one spot. The moment you start rolling your luggage they will come after you, but if you just stay, you are invisible to their preying eyes.

I waited and waited and texted and waited. She was stuck in traffic. I ran out of my credit on my phone and so I decided to look for a public phone. Went to the money changer and got some change, and made the call. She said she was at the airport and then it happened.

I came out of the public phone booth and there she was with a big smile! We met! (whoops!) Then she took me to my hotel.

Jakarta is beautiful with big wide roads and huge sky scrapers and cross roads. They have something at every junction, statues, waterfalls and beautiful structures. We met our mutual friends, @TengkuDewi, @DevyPrameswari and Amal, @JustDiii, @Agnes_Novi and @TheoNatalie over the next three days before leaving to Bali. 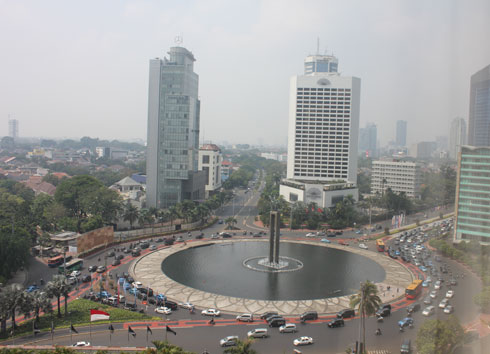 Bali is a tourist hot spot. You see tourists everywhere, babes in bikinis, guys with surfing boards, young and old. Bali has a lot of Hindu architecture though out and mostly everywhere feels like the ocean. 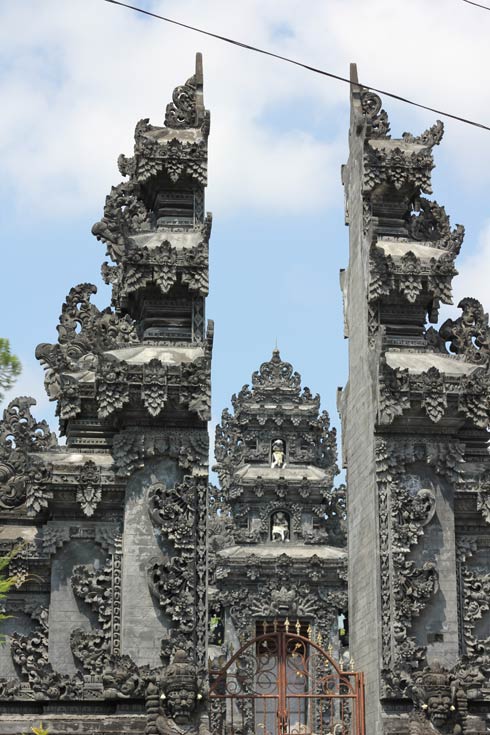 Bandung is a cold city. Its the capital of Java Island and is just 3 hours away from Jakarta.

The events of the story where intentionally truncated to protect the privacy of its actors. 😉 Here is some trivia:

I do have a bucket list and this trip cleared off many from it. Visiting friends in Indonesia was one of them.

We met Devy at a Starbucks in a mall in Jakarta and I wanted to try something original, this being my first time at Starbucks. I ordered the Strongest coffee they had and I got it served in a tinie tiny test-tube 😛 It sucked big time, tasted like I dont know.. who would drink that? 😀 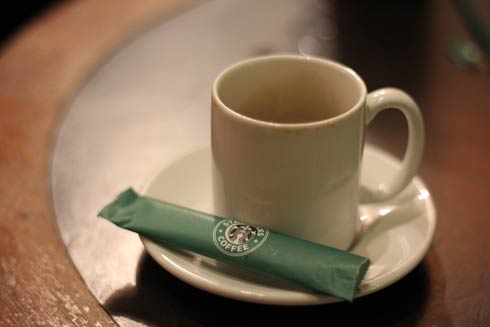 On the last day of the trip, I had something else from Bandung and that tasted more like coffee. Check!

I had my first KFC in Bali. Well, there is KFC in Cochin but I never got  a chance to have one. It had to come from Bali, who would have thought that? Chicken tastes the same everywhere, just awesome! Interestingly KFC costs the same as in India. 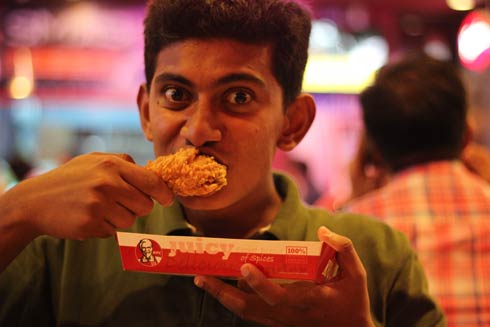 In Bahasa, Chicken is Ayam. There was a lot of KFC involved in the trip and one lady was kind enough to give me a whole sheet of KFC stickers!

Things I Learnt About Flying Abroad

The Indonesian Trip was an experience of a lifetime. If I say anything more, It would be an understatement.