The REAL Art of Living

Yesterday was a Sunday and there was a Follow up class of YES+, the Art of Living course I attended recently. We were given a hint that we all would go out to a beach, but for some reasons that idea was put off.

Something even bigger happened. We learnt the real Art of Living. Literally!

So we did what we were asked to do and we came back to the groups. Now they said “Go and find a Job”, just like that!

The activity was to go out with just that 10 Rs. and make money doing some job. No Begging, and we cant say that we are from Art of Living before the job is given.

Seriously I had no idea what to do when I heard this, but thought of giving it a shot. So off we went. The easiest thing that came to our mind was to wash cars!! We knocked some doors and finally found a car to wash. The owner was a nice guy named Karthik and he agreed to let us wash his Santro car.

So me and Abhilash formed one group and the rest (Sooraj, Nisha and Athira) formed another. Washing a car is a two man job. We washed the thing very thoroughly and got paid Rs 100/-

Abhi was the only guy with a mobile and others didn’t have his number, so actually we had no idea where the others were. We were in search of another car to wash. Again, knocked a couple of doors, still no luck. Finally we ended up in the home of a Gentle man (whose name I casually forgot, but remembers that he is a Bank Manager) who we later found that he has done Art of Living Basic course. Washed his Wagon R and made another Rs. 100/- 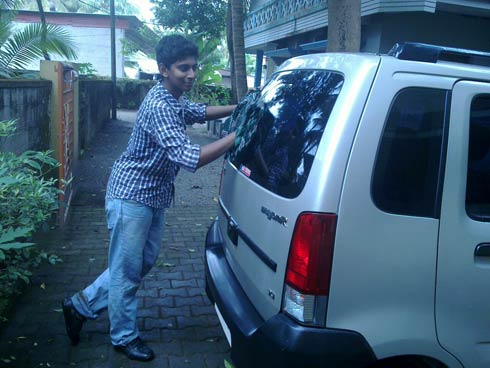 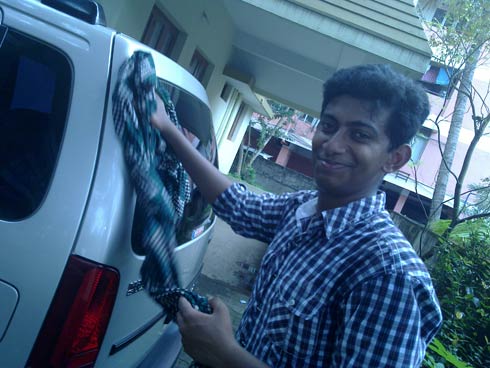 In the mean while our team mates (we met up on the streets) had cleaned a house and got some food and made Rs. 200/- They later cleaned another house and made another Rs 150/-

Me and Abhilash went to a posh looking home and the lady asked us to play with her Kid! Luckily the kid was sleeping, else we would have got into trouble 😛

We returned to the centre and found another car to wash and that made another Rs. 100/-

All teams assembled. One team had made Rs. 960 something by cleaning a Garage and another team made Rs. 450. Around 2100 bucks in total in 4 hours. Not bad, huh?

That was one heck of an experience. Realized that there are more than one way to make a living!

p.s: Lesson learnt from washing cars: Start from the Top of the Car, else you would have to redo the wash!